Inspired in games like For Sale! , The Cat in The Sack and of course Age of Empires 2

Images and sounds of the game are mostly taken from AoE2 DE game, so I dont take any ownership on them.

Art and Audio: The amazing team who made Age of Empires II DE and some guy named D.G.R. who posted the night version of the lobby

Hey DonForse, saw the game featured on Dave's channel from a few months back, having some trouble launching it. on the web application it is giving me an unknown error every time I try to play as guest or make a new account, and on the mobile version its telling me its unable to establish SSL connection just thought I'd let you know looks like a fun game!

Hey glad to see people still enjoying it :B

Im at work right now so I cant fully check it, but just played it in both versions and the game seems to be working normally, maybe server was down for a while.

Thanks for the speedy reply, im still having the same problem on both platforms + have tried clearing the app data, really strange would be interested to see if anyone else has had the same problem! I'm in the UK so don't know if there would be a region issue but cant see why that would be. No worries if there's no specific fix for me could just be isolated tech weirdness :)

I really like your game and have been playing a lot.

Can I have some suggestions for your game so that it would, in my opinion, be more balanced and more strategic?

Sure, just leave them in the comments, I cant promise I will add them, but im glad to listen to possible changes :)

Thanks for listening - below are just my suggestions:

It would be better if you could add THE COST for each unit and upgrade. For example:

* The TOTAL COSTS for each round is possibly 10 - so if you play Yeomen, you cannot play War Elephant in the same round.

1. This would create a more balanced strategy - you must choose between: expensive upgrade + cheap unit  or  cheap upgrade + expensive unit for each round.

2. This would make some units MORE VIABLE - for example, I will replace Militia or Skirmisher immediately if I have them in my hand.

3. This would stop the spamming of powerful Upgrades and Units in the same round - for example: if you play Howdah and then play War Elephant, you will win 90% that round.

OF COURSE - If you intended to make this game as a mix of GOOD cards and BAD cards, this suggestion will be off the mark.

Just my first suggestion - wait for your reply and I will move on to the second one. Thanks!

I intended the game as a mix of Good and Bad cards, in fact I planned to restrict the reroll function a bit (something like 5 cards, then 3, then 1).

Some people already suggested it to me, but I dont want to remove weak cards, the purpose of them is existing, you may want to reroll a 10 power unit with upgrades, because of the chance that you may get something better, but you should still think of doing so, cause you might get a 6 power unit, with no upgrades.

I think some upgrades still needs a bit of work, it doesnt really make sense that you would play a card that gives +4 against some units when you have one that does +4 against all units.

Overall I think the idea is interesting, I dont think i will implement it in the near future though, mostly cause I have been working in the game like crazy for the last 3 month~, that idea would need a total change of the game, but still wanted to let you know that its a really nice idea

My current iteration is:

This game is really cool. Love the idea. Good to know others are still remembering AoE2 fondly! Also good job on the multiplayer - allowing guest accounts, and making it easy to play with friends. Makes it super accessible.

thanks! I also checked out Square Worlds and its super addicting :)

I love the Game so far. I just played a few rounds against AI but its so much fun.

I workas a Media Designer in a Photostudio and last year I tried to recreate the AoE fontstyle in Photoshop as close as I could. So if you want some help with 2D graphics I'd love to help as good as I can.

Unfortunately two were bugged. In the first one we had a tie in round 3 and in round 4 the following was displayed:

"Error, game could not be found" (or something similar to that)

In Game 3 I ran out of time when discarding cards and in round 6 I didnt have any upgrade cards to choose from and no military units other than my villager. So I ran out of time to put my upgrade card and the game chose one at random, then it showed me the enemy had played a card too but it was never revealed.

in both cases I had to f5 to go back into the lobby.

Thanks for your work. The game is really fun.

Edit: I played as a guest, if that changes anything

Hey thanks for playing and for leaving me the detailed error.

The game 3 one should be working better now, Its kind of hard to explain, but basically, clicking outside of the window and inside will now reload the game. (Now there's a message saying that, so it should be clearer)

Glad you had fun, I'll keep working a few more days on trying to fix all the bugs :)

thanks for your work
I´ll try it out later

Edit: It runs a lot smoother now and thanks for adding the option to play with a friend. I played 4 rounds now and nothing bad happened

This is neat. Thanks!

Thanks for the kind words :)

Thanks for the feedback, I`ll be working on this issue today, I think its a problem related to playing multiple games, but i`ll have to check

np i love the game and hope for updates. will be playing every day and hope to see more pros and content creaters make videos on it

I like the game, but it has quite some bugs (especially multiplayer). Some things i noticed. vs bots works fine and is quite a good game :)

Today I uploaded a new version, hopefully is working better

game is pretty buggy when i run out of time i am unable to play cards and the game freezes. would recomend a higher time limit so people can read the cards. otherwise love the game

Yes i also love the game. But when i am picking which cards to replace, if the time runs out, i'm also completely out of any cards, and can't progress further.

What I found out is that when the window lose focus, the browser does some weird shit that messes up the game. I added a thing when you click in the game after losing focus, the game should refresh and your hand should appear again, i`ll add some things that indicates it next patch, but have been too busy, check if that fixes it for you :) 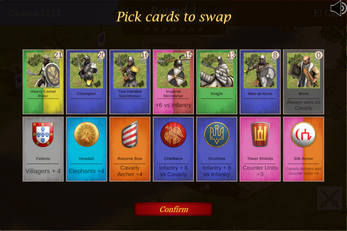 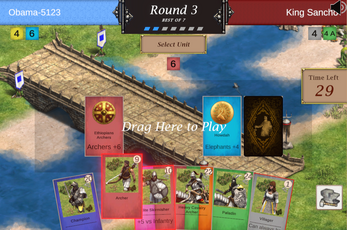 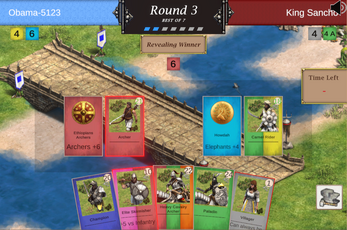